First of all: the

con_solation vid show is live! Post with links here; Vid show here. This is a virtual vid show for vids that would have premiered at cons this spring if things hadn't, well. Happened.

I have a Defenders vid in it, Welcome To New York. I'll make a proper post for it in a day or two. In the meantime, check out the vids! (The Buffy one is password protected; the password is "buffy".)

This Twitter thread about two amorous disaster snails made my day. (Link goes to a de-Twitterfied version so you can read the whole thing on one page.) The comic timing is great. I think this is right up there with the owl sex playlist for things to pick me up when I'm having a bad day.

sheron and I had a conversation last year sometime about disappointing series finales and how Supernatural, which is ending this year after 15(!!) seasons, is basically immune to that because they've already had so many bizarre, game-changing developments in the actual show. There is literally nothing that could happen in the finale that would be more out-of-left-field and WTF than things that happened several seasons ago. I mean, many finales kill characters, and some kill most of their characters, but really, who on SPN hasn't died multiple times at this point? The characters realize that their entire lives are happening inside a book and the book writer is God? Been there! They break the fourth wall Blazing Saddles-style and find themselves on a soundstage with the actors playing them? Done that! Everyone ends up in Heaven and/or Hell? They were doing that by season 2. A lot of finales pull the rug out from under their viewers in various bizarre ways, but this show does that all the time anyway. Everything from turning out that it's all a dream, to the world blowing up, is basically something that's already happened in some previous season.

But there was one possibility that we completely forgot to account for:

And it is here.

This show is so meta it broke our timeline!

This entry is also posted at https://sholio.dreamwidth.org/1321158.html with

(No, I don't specify exactly what happened to Ward. I figure I'll leave that open and write the intermediate story one of these days.)

I'm also doing some ficlets for Iron Fist Week, but as that's still a work in progress, I'll post them over here when I'm done.

I somehow seem to have gone and done that thing where I sign up for a million things again. I currently have open assignments for H/C Exchange (both my main assignment and a pinch hit), Id Pro Quo, and SSR Confidential, not to mention the Robot Rainbow flash exchange this weekend. Well, at least it's keeping me busy.

This entry is also posted at https://sholio.dreamwidth.org/1320743.html with

This entry is also posted at https://sholio.dreamwidth.org/1320448.html with

A little while back I posted scans of some of the bits I found charming from the Magicians books, and I just ran across this one that I also scanned. (Spoilery scene from near the end of The Magician's Land that really doesn't mean a whole lot out of context.)

This entry is also posted at https://sholio.dreamwidth.org/1320011.html with

Tomorrow (March 30) is the last day of signups for

ssrconfidential. I usually let it go overnight and close/run matching when I get up in the morning, so you can still sign up as long as it's March 30 anywhere.

Signups are notably down this year; it's usually somewhere in the mid-20s, but I only have 15 so far. (Note: this isn't meant to try to push anyone to sign up. Just an observation.) I was worried for a while that we might have so few that matching would be really difficult, but I think it'll be okay, especially since there's usually a small flurry of last-minute signups. If I end up with a bunch of people without matches, I might open it up again for a few days, but hopefully I won't need to.

con_solation is a vidshow for vid premieres that were derailed by all the con cancellations. I'm trying to finish one for it, though I need to light a fire under myself if I'm going to have it ready in time!

Your title must contain one of our colors, but we will allow you to choose which one. They are all very good colors, so you should have no trouble making this work.

I am totally signing up for this. Signups open midweek and it runs through the weekend.

Iron Fist characters in pandemic lockdown. (I maintain that inflicting one's own suffering on fictional characters is a time-honored coping mechanism.)

I'm running Iron Fist Week on Tumblr this year from April 1-7, and writing short ficlets for it. I'd happily write one for anyone who wants to leave me an Iron-Fist-related prompt, if there's anything you'd like.

This entry is also posted at https://sholio.dreamwidth.org/1319698.html with

Posted some snow pictures on Tumblr (also on Facebook). We have absolutely ridiculous amounts of snow right now. We got about a foot and a half in the last two days, on top of all the snow we already had. 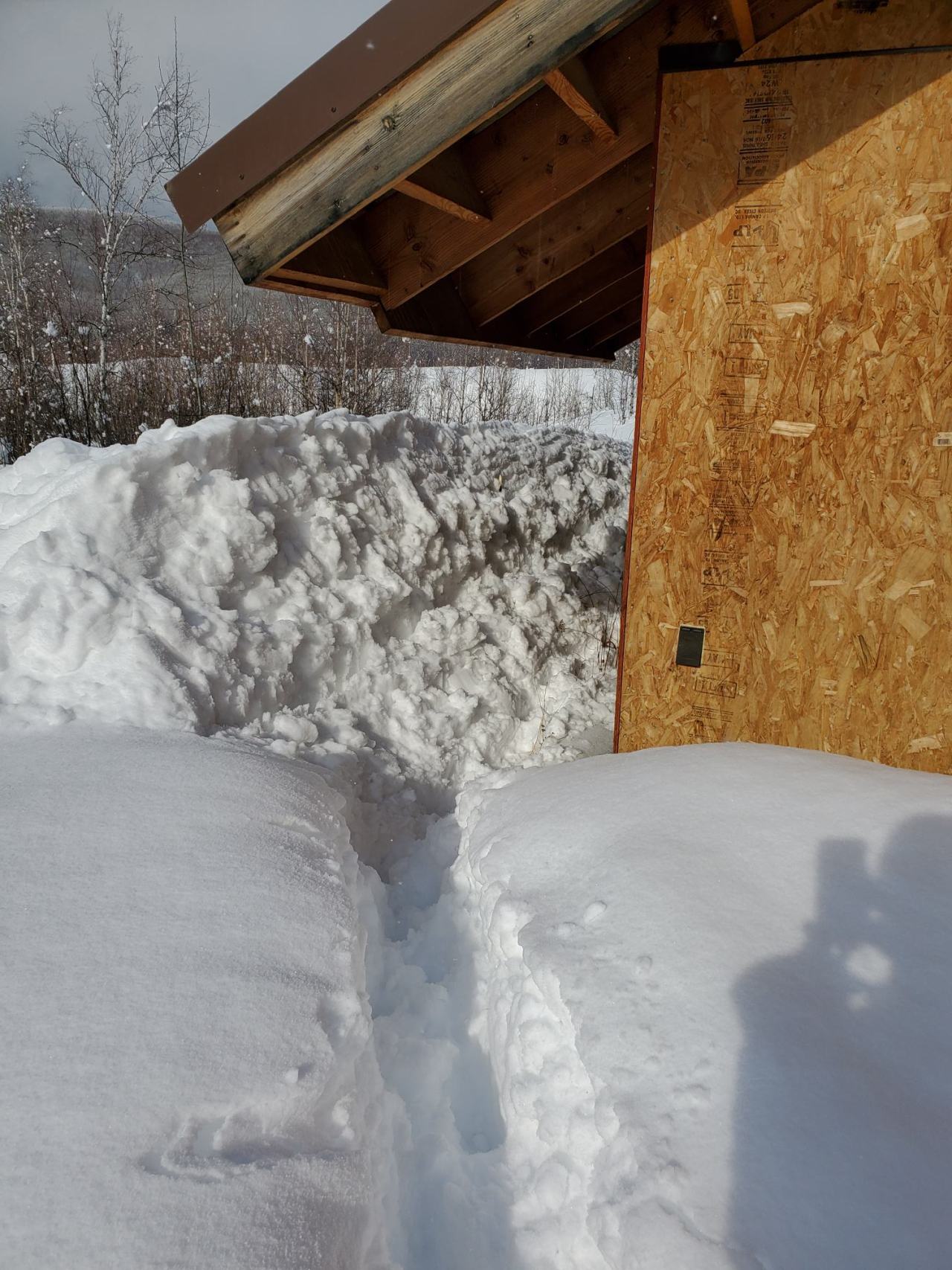 This entry is also posted at https://sholio.dreamwidth.org/1319667.html with

I did the first challenge at

vexercises this afternoon, and it was a lot of fun! (Also very hard to make myself follow the rules! I kept wanting to trim or recut the clips.)

Here are the instructions:

Create a video edit of exactly 60 seconds consisting of precisely 10 video clips from your chosen source text, each lasting precisely 6 seconds, assembled with straight cuts. Make two versions of your pechakucha, with 1 minute excerpts from two different songs as audio. Fade in and out on your audio at the beginning and end of the audio clip.

[Word to the wise: Most six second clips that you use are bound to have in-clip cuts--you don't have to go looking only for clips that have no internal cuts. But you can make those internal cuts work for you rhythmically or thematically etc!]

I decided to do a Nakia/T'Challa vid since I already have all of Black Panther imported into Final Cut and there are a relatively limited number of scenes featuring both of them, so I wouldn't have too many clips to choose from. I did cheat a little and let the last clip play out for an extra second or two so I could fit all of the Survivor chorus without losing the first few words of the lyrics.

Version 1: High On You (Survivor)

(Note: At the moment, for me, the streaming versions aren't playing, but they play fine if you click through on the Youtube link. Hopefully whatever glitch is causing it will go away soon.)

This entry is also posted at https://sholio.dreamwidth.org/1319055.html with

naye I learned about

vexercises, a new community for vidding challenges! It is designed so anyone from a beginner to someone who has been doing it for a while can participate. The first challenge (running 'til the end of the month) is:

Create a video edit of exactly 60 seconds consisting of precisely 10 video clips from your chosen source text, each lasting precisely 6 seconds, assembled with straight cuts. Make two versions, with 1 minute excerpts from two different songs as audio. Fade in and out on your audio at the beginning and end of the audio clip.

You can see people's vids and examples on the challenge post. See also all exercises here.

So as you can see, it's completely accessible to someone with minimal experience - but actually hella challenging for someone who does have experience! I think I'm gonna try it. :D

This entry is also posted at https://sholio.dreamwidth.org/1318740.html with

I thought this might be of interest to the self-pub people here! One of my major goals this year is to take everything I've learned about promoting myself through the Zoe project, as well as the Lauren Esker project on the side, and apply it to relaunching my real-name books, and see if I can make some decent money off them without compromising the stories and themes I want to work with. I'm working against a steep uphill curve here because none of my books are particularly commercial and most of them are books I wrote years ago, had rejected by a bunch of agents, and eventually ended up sitting on. So I'm entirely unsure if I will actually make any money doing this at all. But I'm going to try.

This entry is also posted at https://sholio.dreamwidth.org/1318560.html with

I recently (as of yesterday) discovered British folk singer Laura Marling through a cover of "A Hard Rain's A-Gonna Fall" over the end credits of my current fluffy brain-candy show, 9-1-1 Lone Star, which was so sublime that I had to look up who was singing it, and then I went and looked up everything she'd done and nabbed a bunch of songs off iTunes.

My favorite of her songs thus far is "Goodbye England, Covered in Snow":

And the Dylan cover that originally sucked me in:

And another one I really liked, "Rambling Man" (not the one you're thinking of):

This entry is also posted at https://sholio.dreamwidth.org/1318318.html with